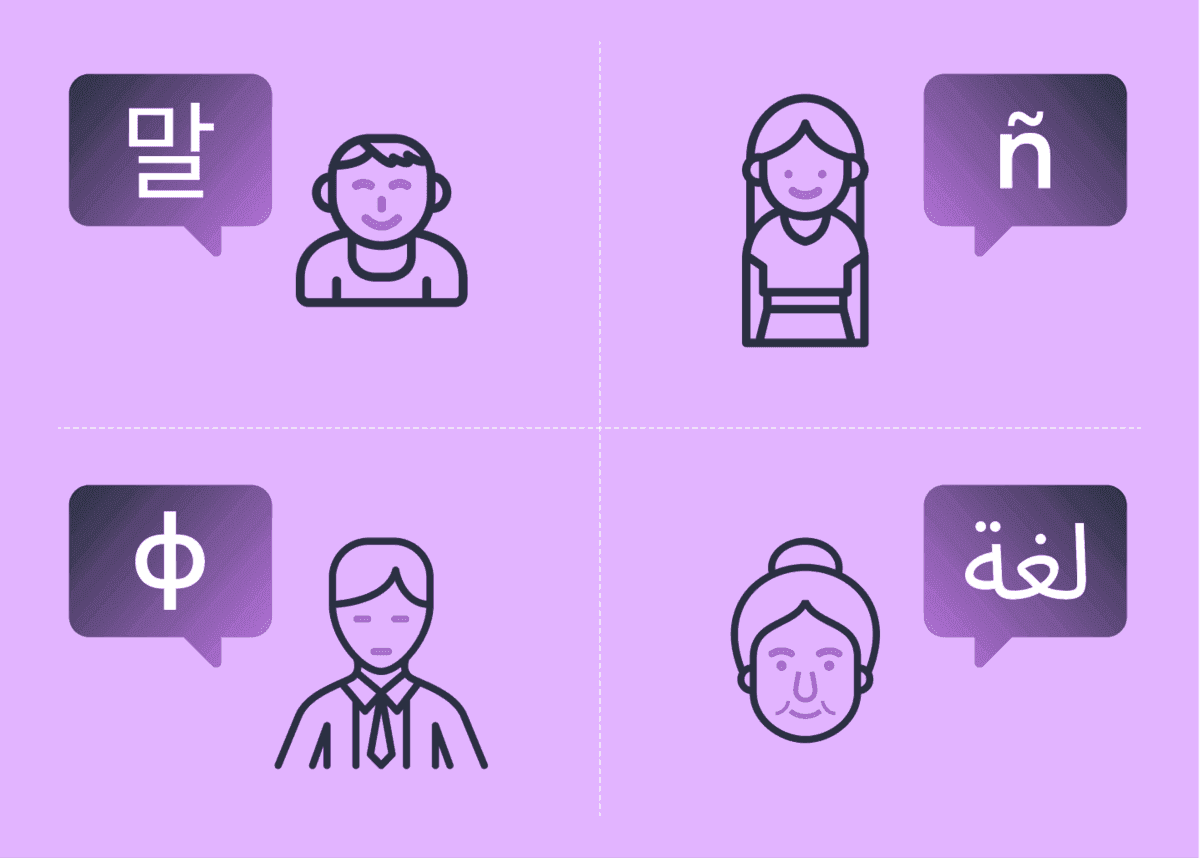 Whenever researchers publish new findings about the effects of age on language learning, a flurry of sensationalist articles follow. Usually, they say something like, “You may as well just give up learning a language if you started when you were over 18, because it’s basically impossible!”

This interpretation has almost no relation to what the science actually says. Neuroscientists and linguists have long understood that processing language is one of the most complex things the brain can do, and while some of the functions that support language learning peak during childhood, others develop later, and some even seem to have a renaissance sometime between the ages of 50 and 75!1

Then there’s the question of what it means to learn a language, and what we hope to achieve with our efforts. Are we aiming to be indistinguishable from a native speaker when we use our target language, or simply to participate comfortably in daily social interactions, understanding and being understood with as little friction as possible?

Using the latter definition, the research suggests that with sufficient study and exposure, one can become fluent in a new language starting at practically any age.2

However, there are advantages and disadvantages to kicking off the process in different phases of life.

To get the perfect accent, start before 10

For many kids, starting to learn a second language before the age of 7 means it can be internalized like a “native” tongue, with little noticeable skill difference from the language they heard as a baby, as long as they continue to be immersed in both throughout childhood.3

This is what linguists tend to mean when they discuss “bilingualism,” which most researchers agree is different from simply having mastered a second language.

There’s even some evidence that an early language can be “forgotten” and replaced by another language, which becomes the new L1.4

Some scientists argue that a second language can still be “acquired” (i.e., fully internalized like an L1) later in life, but the precise difference between acquisition and learning is hotly debated.

However, there’s one unmistakable advantage that children have over adults when it comes to language, and that’s the ability to identify and differentiate between new sounds. To put it another way, we learn a set of phonemes during childhood, and any new phonemes we hear in adulthood will sound to us like versions of the same set.

For example, a Spanish-speaking child will learn 5 vowel sounds, /ɐ̞/, /i/, /e̞/, /u/, and /o̞/. If they encounter German later in life, they will hear the vowel sound /o/, which is approximately between the Spanish sounds /u/ and /o̞/. At first, it can be difficult to hear the difference between this new sound and one of its neighbors.

As a result, later learners are more likely to speak with a recognizably “foreign accent,” even when they achieve fluency. Listening comprehension may also be more challenging to develop the later one starts a new language.

There are many good arguments for introducing a second language before the age of 10, including research indicating a boost to reasoning and problem-solving skills in such children.5 However, some evidence suggests that children who are slightly late in verbal development and literacy can have their difficulties made much worse by the added complexity of dealing with two distinct languages.6

For children who don’t gravitate naturally toward language, there’s a possibility that the additional language will create confusion and hamper them from becoming confident communicators and enthusiastic readers. As in many aspects of education, a tailored approach based on the unique strengths of each child is much better than one-size-fits-all.

To intuitively understand the grammar, immerse between 10 and 18

Although the building blocks of syntax and semantics are learned during early childhood, some of the more complex rules of grammar, style, and using language to persuade, explain, indicate and express ideas and emotions are developed later on.

Between the ages of 10 and 18, we gain a unique sense of ownership over our first language. It has been observed that intensive study of a second language during the same period can result in a comprehensive and unconscious understanding of the new grammar.7 In other words, learning a new language at this point makes it much more likely that using it throughout life will be “effortless.”

Throughout this time, the social aspects of language start seizing our attention. We become motivated to impress or indicate identity with our language performance, and linguistic anxiety may begin.8 Picking up a second language during this time can make us more confident and encourage a reflective attitude to these changes. 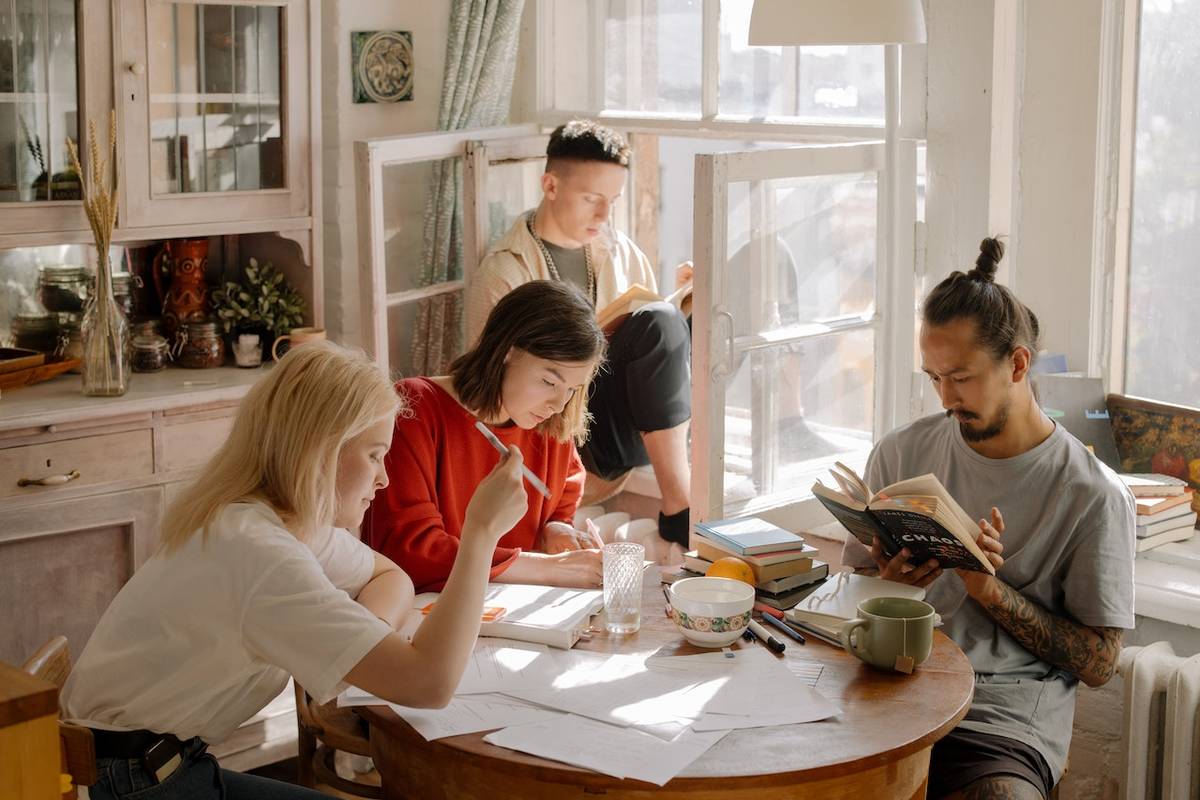 To build a huge vocabulary, study in adulthood

The process of language learning in adulthood tends to feature a lot more translation. We’re more likely to resort to thinking about what we want to say in our native language first – a tough habit to break but one that must be broken if we hope to achieve fluency.

For some learners, language anxiety may grow as we feel embarrassed about making mistakes. This can lead to hesitation or overthinking and slow down the natural formation of new synaptic connections that let us automatically reproduce the language.

But there are also many advantages to studying an additional language in adulthood. This period of life usually gives us the peak of our L1 communication skills9, as well as literary and socio-cultural knowledge. On the pre-verbal level, this is the time when we most likely know what we mean to express and have access to the widest range of contextual clues about what others want to tell us.

Attention tends to keep improving until well into old age, making it easier to study efficiently. Although many forms of memory go into decline, procedural memory and vocabulary do not. Between the ages of 18 and 50 is a great time to acquire a large vocabulary, even without building precognitive foundations in childhood.

Your accent may not be perfect, and it may require a little bit of cognitive effort to switch into your target language, but there’s no reason to think you can’t master a brand new language in middle age.

To learn the basics quickly, pick up a new language at 50+

Believe it or not, certain mental skills have been observed to keep improving until the mid-to-late 70s. Among these are what cognitive scientists call “orienting” and “executive inhibition.” To put it simply, it’s the ability to stay focused on whatever you’re doing.

When beginning a new language from scratch, that focus is critical. It’s extremely easy to get distracted and lose track of a new mind map of words, syntax, and sounds. Once we’ve established a baseline, we can usually start building on that knowledge more passively.

So in terms of getting from zero to A1 or A2 proficiency, the 50+ group might even be the fastest. That theory hasn’t been researched thoroughly, but it’s within the bounds of possibility.

At the very least, that means that if the goal is to open up the basics of communication with users of your target language, there’s really no age limit. 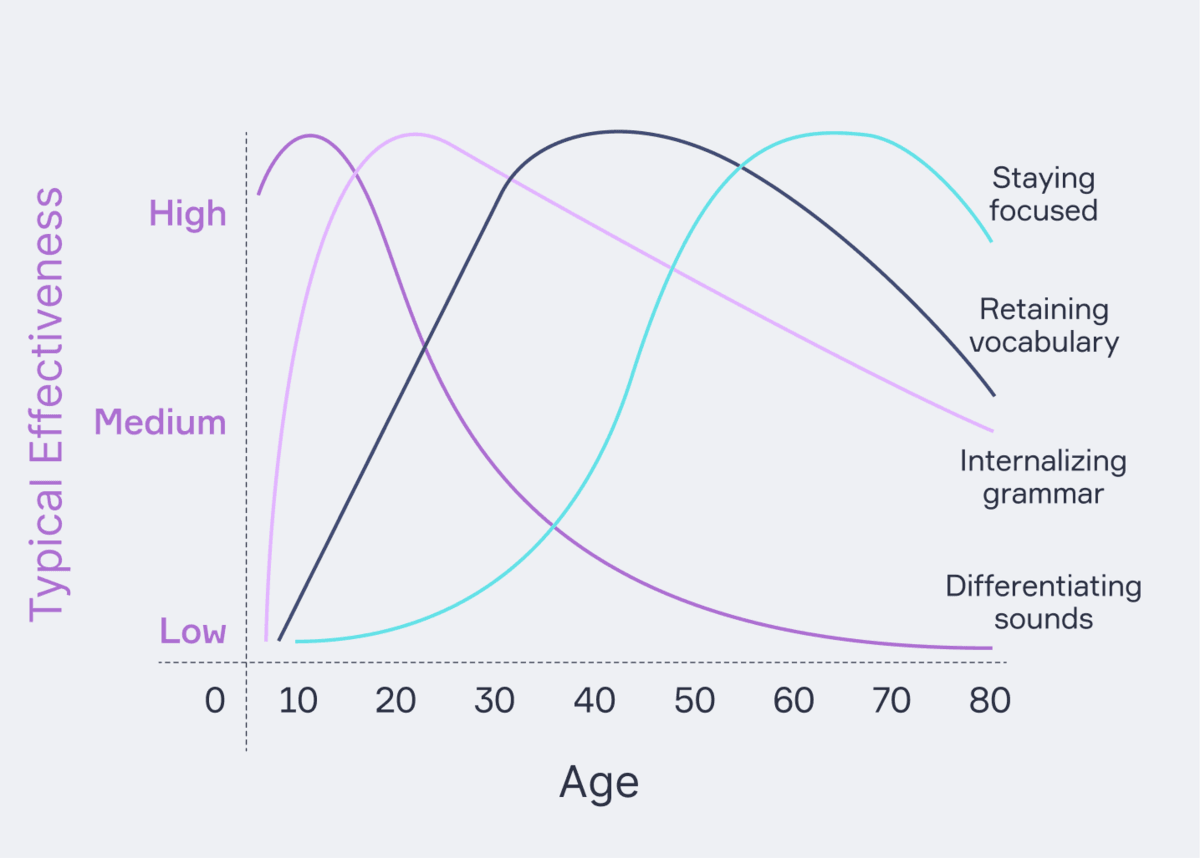 We keep learning our native language throughout life. Prolific readers are constantly picking up new vocabulary and new possible combinations of words.

Why should it be any different with additional languages? It’s true that the way our brains work changes as we get older, but there’s no cut-off point where it suddenly becomes futile to learn languages. Some things get harder, others get easier.

There’s much to be said for achieving an intermediate level in your target language. You may not be able to understand everything, but being able to travel, encounter native users, and have simple conversations can be profoundly rewarding. Having an accent or making frequent syntax mistakes doesn’t undermine that achievement, especially if your interlocutors can understand you just fine.

Starting earlier can raise the bar on how good you can get at phonology and grammar, but none of these skills come about without continued exposure. You can start acquiring a language in childhood, but if you never use it in adulthood you won’t be a comfortable speaker!

The bottom line is that it’s never too late to start learning or re-learning a language. 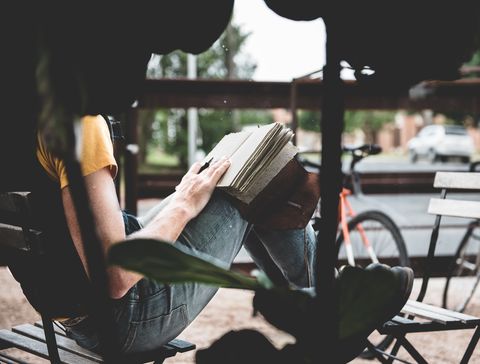 How can you learn a new language with Lingvist? Follow these three easy steps to begin your language learning journey, and you’ll be fluent in no time. 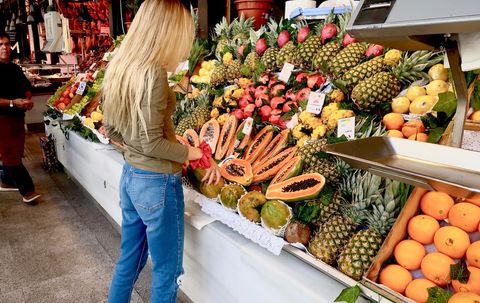 The best way to learn a language is to jump straight into situations where you have to perform. These challenges will help you get out of your comfort zone!

Like many other apps, we collect personal data to provide a better experience for our learners. Please review our Privacy Policy to learn more about how we process this data.  END_OF_DOCUMENT_TOKEN_TO_BE_REPLACED