French Verbs that End in -er 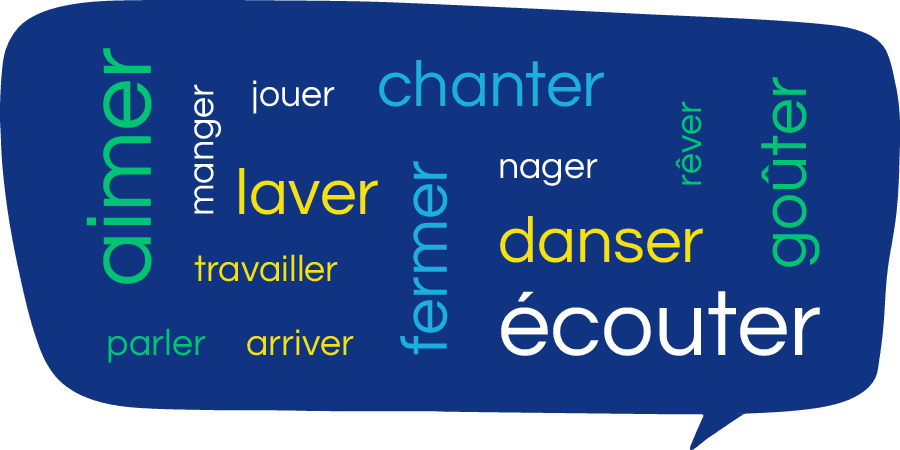 All French verbs end in either -er, -re, or -ir. Each of these verb categories has specific rules governing how they change to express layers of crucial information about the situation. The category of verbs that ends in -er is the largest category of verbs in French, comprising about 90% or 1,000 individual verbs. As the endings for -er verbs are so simple, they’re a great introduction to the concept of conjugation. Additionally, as new verbs are adopted from English (called “Anglicisms”), they take the -er ending, so this group of verbs is growing quickly. Luckily, the conjugations for -er verbs are mostly regular (versus irregular), meaning that the rules for conjugating them to fit the situation will apply to most verbs you encounter!

The form of a verb changes to show who perpetrated the action (person) and when it occurred (tense). French uses one extra person category (vous) that corresponds to addressing “you all / you guys” in English.

Though native speakers may not notice it, English verbs also change depending on who performs it and when the action occurs. Most verbs only change in the third person singular (see below) in English, but all verbs change to distinguish when something occurs.

In most cases (apart from irregular verbs), the English past tense is formed by adding -ed to the word. Both English and French have a lot of irregular verbs which simply need to be memorized, but learning the rule for regular verbs makes conjugation much easier.

Being exposed to verbs in context (rather than just in a chart) is also crucial to becoming comfortable using them – not to mention it’s more fun! Use Lingvist’s French Course to see verbs in context, as well as look over grammar tips to clarify concepts explicitly as needed.

The infinitive form of a verb is its most basic form. You can spot them easily in French because they retain their original ending of -er, -ir, or -re. The equivalent meaning in English is the same as “to [verb],” so aimer translates to “to like.”

For regular verbs, the infinitive lends its stem to its conjugated forms in a predictable way. The stem, or radical (from “root” in French: racine), is the part that occurs before the -er, -ir, or -re.

Simply put, to conjugate an -er verb, drop the -er and add the appropriate ending according to the person and tense.

To talk about something being done presently, drop the -er and add one of these endings.

English often uses the present continuous (example below with arriver) instead of the present indicative, so you’ll end up using the present indicative a lot more often in French than you do in English. In English, the present often has an implied regularity or habitual connotation to it. The French indicative can be used to talk about habitual actions, but also to describe something happening presently or that will occur immediately.

You may have also noticed that when the first letter of the next word is a vowel, the personal pronoun je (“I”) is combined with the word to form j’arrive.

Here are the 20 most common -er verbs. Irregular verbs are in bold.

Even though -er verbs are mostly regular, some common -er verbs are irregular. Some of these verbs have stem changes and slight spelling changes but still use the regular endings. The verb aller is also completely irregular.

1. The verb aller (to go) is used just as frequently as it is in English, so the conjugation is very important to memorize. It is irregular in all but the nous and vous forms. It’s also used to combine with another verb (just as in English) to form the futur proche (“close” future) tense.

Je vais manger un croissant. (I am going to eat a croissant.)

2. Verbs that switch their accent aigu (é) for an accent grave (è): The é in verbs that end in -é_er changes to an è in the stem-changed conjugations (all except nous and vous in present tense).

altérer (to alter) céder (to give up, dispose of) célébrer (to celebrate) compléter (to complete) considérer (to consider) différer (to differ) espérer (to hope) exagérer (to exaggerate) gérer (to manage) inquiéter (to worry) modérer (to moderate) pénétrer (to enter) posséder (to possess) préférer (to prefer) protéger (to protect) refléter (to reflect) répéter (to repeat) révéler (to reveal) suggérer (to suggest)

The e in most verbs that end in -e_er changes to an è in the stem-changed conjugations (all except nous and vous in present tense).

acheter (to buy) amener (to take) écarteler (to tear apart) emmener (to take) enlever (to remove) fureter (to rummage, nose about) geler (to freeze) haleter (to pant) harceler (to harass) lever (to lift, raise) marteler (to hammer, pound) mener (to lead) modeler (to model, shape) peler (to peel) peser (to weigh) promener (to walk)

3. Some French verbs that end in -eler and -eter double the l or t in the stem-changed conjugations (all except nous and vous in the present).

Verbs that end in -eler or -eter and follow this rule:

appeler (to call) chanceler (to totter, wobble) épeler (to spell) rappeler (to call back, recall) renouveler (to renew) ruisseler (to flow, stream) feuilleter (to leaf through) jeter (to throw) projeter (to project) rejeter (to reject)

4. Verbs that end in -ayer, -oyer, or -uyer undergo a stem change from y to an i (all except nous and vous in the present).

For verbs that end in -oyer and -uyer, the stem change is not optional.

Believe it or not, for verbs that end in -ayer, the stem change is optional. This means that both forms are correct in modern French. Perhaps in the future one will win the battle of popularity and the other will fall out of favor, but for now you get to see the evolution of French in action!

balayer (to sweep) effrayer (to frighten) égayer (to cheer up) essayer (to try) payer (to pay) rayer (to draw a line (on/through), to cross out)

Like many other apps, we collect personal data to provide a better experience for our learners. Please review our Privacy Policy to learn more about how we process this data.  END_OF_DOCUMENT_TOKEN_TO_BE_REPLACED