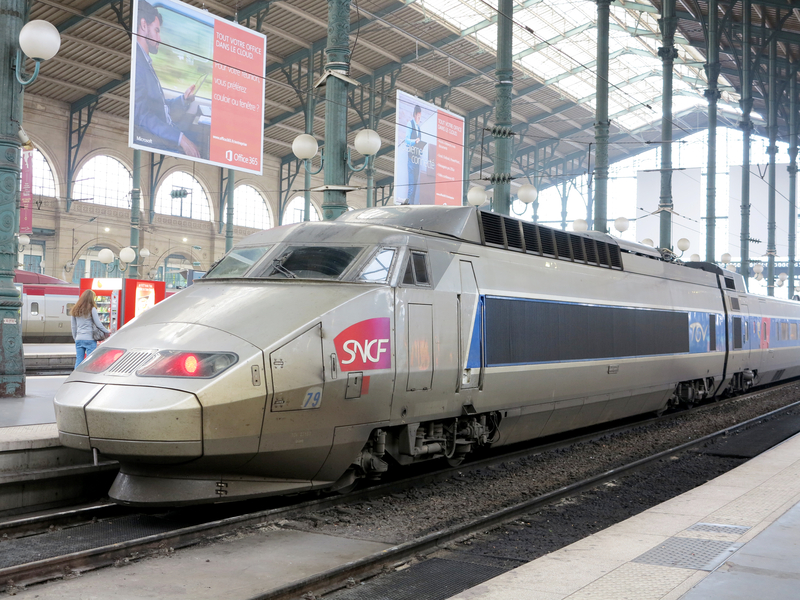 Sur la table (“on the table”) but dans le train (“on the train”)? You may have noticed that French prepositions don’t translate directly, and, furthermore, there seem to be specific prepositions for different nouns! Read on to get a handle on the usual translations of prepositions and how to use some of the most common ones.

What is a Preposition?

Prepositions describe movement, give us details on relations between objects, and provide a description of something/someone based on their location. Common prepositions in English are: at, to, from, for, with, into, between, beside, under, and within. Prepositional phrases can consist of multiple words, which, when combined, function as a preposition does. Usually, prepositions answer the questions “where?” and “which one?”

Certain French prepositions also do double duty (correlating to multiple English prepositions) and vice versa. For example, in French you say that someone is “in” a train, while in English you say that you’re “on” one. The difference between these two doesn’t necessarily change the meaning – someone is still riding the train – it’s just a difference of convention. Don’t worry – it will feel more natural once you’ve had more exposure to the language!

To get started, take a look at a few key groups of prepositions below, noting how their usage differs from English. However, the key to remembering these differences is in actively using them in sentences. Passively looking over a table is helpful as a start, but you won’t commit these to memory without giving yourself opportunities to recall them and puzzle through which is appropriate in a certain situation. Sign up for Lingvist’s online French course to practice prepositions in exercises tailored to your level!

French prepositions provide more specifics than English as to whether an action/event has been completed and whether the duration is set or flexible.

Depuis is used with the present tense for actions that began in the past and are continuing today. In French-speaking countries you’ll often see depuis before a year that a business was founded.

Pendant is used to talk about actions that happened during a specific timeframe in the past, present, or future. Both pendant and pour are used for definitive durations of time with set endpoints.

Unlike pendant, pour can only be used for timeframes in the present or future. It can also be used to talk about deadlines.

Prepositions of Place and Movement

As mentioned above, a one-to-one comparison of prepositions can be tricky. In the chart below, English equivalents are listed with the most common or “core” translation first and the less common uses in parentheses.

*Chez is not a general translation for “at”; it’s only used in special circumstances (see below).

Chez doesn’t have a single direct translation in English. It’s mainly used to talk about something at someone’s “place,” like referring to someone’s home or business as their “place” in English.

It can also be used to talk about characteristics “within” a group or a figurative grouping (such as someone’s work).

Chez Victor Hugo, il y a beaucoup d’images vives. Within Victor Hugo’s work, there is a lot of vivid imagery.

In French the proper preposition for talking about being located in a country depends on the gender of the country. There are a few exceptions with country names that don’t follow the rules, but for most feminine countries, use en. For the majority of masculine countries, use the combination of à + le = au.

Il est en France. He is in France.

Je suis au Maroc. I am in Morocco.

The good news about French prepositions is that they don’t change form to match the gender or number of the noun. However, they do sometimes combine with other articles or determiners, in which case they may take on the features of the noun (because the determiner they’re combining with already matches in gender and number).

The preposition à combines with the definite article (“the”) la, le, l’, and les when you’re describing location or position. Don’t worry – it doesn’t need to combine with the indefinite articles “a/an”) un and une.

The preposition de also combines with the definite article (“the”), but not the indefinite articles “a/an”) un and une. De is one of the most commonly used prepositions, and is often used in the same way as “of” or “from” in English. For example, it can be used when talking about returning from somewhere or an object that’s from a certain place.

de + la = de la Je reviens de la banque. I just got back from the bank.

You can also use à…de to mean “to…from” in this fashion:

Just as in English, sometimes prepositions combine to form an even more specific description of something’s location or relation. Note that some of these were included in earlier tables.

Just as in English, certain verbs only go with a specific preposition. Sometimes the choice feels arbitrary, but any native speaker will have a feeling that one is right and the other is wrong. For this reason, these verb and preposition combinations (and their combined meanings) mainly need to be memorized.

In case you’re feeling tempted to add a preposition (because one is used in English) with the following verbs, remember that these verbs do not need a preposition:

Don’t worry if you’re feeling a little overwhelmed with these lists and tables at first! Take a break from reading grammar rules and watch a film in French, or try listening to French radio and paying attention to the prepositions you hear. You’ll notice that most of them are used in the same way as their English counterparts, which is a huge advantage for an English speaker. The rest will start to feel more natural with time and practice! Don’t forget to sign up for Lingvist’s online French course to practice both while on the go on your mobile device or at home on your computer.

Like many other apps, we collect personal data to provide a better experience for our learners. Please review our Privacy Policy to learn more about how we process this data.  END_OF_DOCUMENT_TOKEN_TO_BE_REPLACED