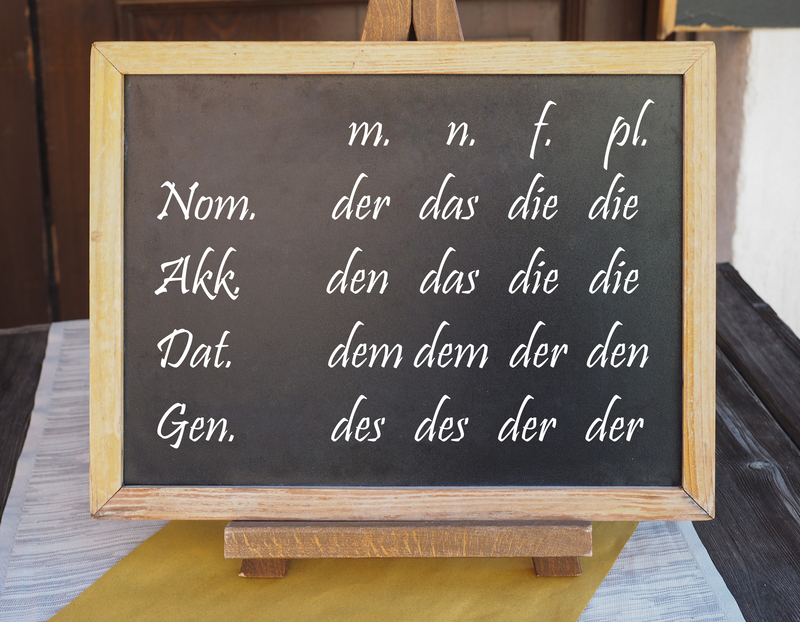 The easiest way to know which ending is appropriate is to first memorize the patterns (shown in tables below) then think of the definite article that accompanies the noun and use that to help select which ending goes along with it. Remember that a “definite” article is used to pick out a specific thing, something definitive, while an “indefinite” article is used to talk about a “swappable” noun, something which could be swapped for another of the same type (an apple versus the apple).

Features of the Noun

In English, the only feature of the noun that is obvious is the plurality; whether we’re talking about one single object (cat) or multiple (cats). While this is also important in German, there are a few other properties of the noun that you need to consider before selecting the correct ending.

German has three different grammatical “genders” for a noun: masculine, feminine, and neuter (neutral). The specific gender of a noun just needs to be memorized, but it will start to seem automatic with time! Luckily, adjectives use the same form for all three plural forms of gender, though it does vary depending on the type of determiner.

After you’ve determined the gender of the noun, you need to think about the case. German nouns have a certain “case,” which you can spot based on the definite article (“the” in English) they use. These cases help distinguish the relationship the noun has to the action the verb is describing. The four cases are: nominative (usually the subject of the sentence), accusative (usually the object), dative (usually the indirect object), and genitive (denotes a possession or close association like “X of someone”).

There are both strong and weak forms of adjectives. Strong forms are used with indefinite articles (“a/an” in English) or when there is no determiner.

Strong endings are mostly identical with the definite article, minus the “d-.” In some cases, they use the last two letters and in others the final single letter. Compare the two tables and notice the similarities.

Other “article-like” words such as dieser, jener, jeder, mancher, welcher, and solcher all decline following the table above.

Note that the neutral nominative and accusative change from an “-a-” to an “-e-.”

These should always be used with indefinite articles, possessives, and the negative kein/keinen/keine.

They are also used with demonstratives pointing something out and a few other quantitative terms:

Weak endings are easier to remember because they are all either -e or -en.

Position of the Adjective

For the most part, adjectives occur before the noun, just like in English. In this position they always need to change to match the noun. The exception to this is in “predicate” position or when they occur after the noun + the English equivalent verb “is/are.” In this position they do not need to decline and are indistinguishable from adverbs.

Understanding which adjective ending to select is a pretty hefty first step, so don’t worry if you need to let the different requirements sink in for a while. Becoming comfortable choosing one quickly while speaking comes with a bit of practice. Sign up for Lingvist’s online German course to start quizzing yourself and get your brain used to recognizing the case, gender, and plurality of the noun, as well as which article you want to use.

Like many other apps, we collect personal data to provide a better experience for our learners. Please review our Privacy Policy to learn more about how we process this data.  END_OF_DOCUMENT_TOKEN_TO_BE_REPLACED