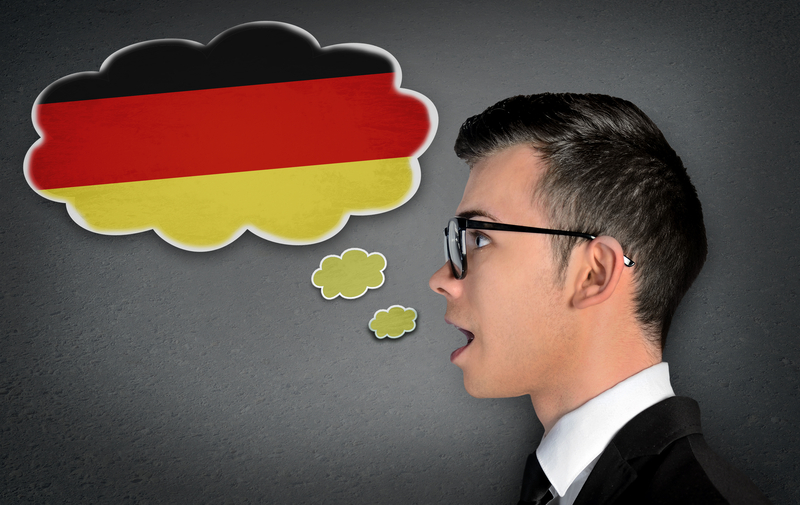 While your first instinct may be to say that one letter is tied to one sound, as soon as you put this theory to the test in English, you’ll find that letters can take on many different sounds, depending on their neighbors. For example, the “a” at the start of “apple” is very different from the “a” in the middle of the word “car.” While English has what’s classified as a “deep” or “opaque” orthography, meaning that it’s not immediately clear how to pronounce a word based on its spelling, German is much more regular in its pronunciation rules. In fact, in 1996 a reform by the German government in spelling rules made it even easier for German learners to apply regular patterns to pronunciation.

This is great news for you, because it means that learning pronunciation rules will go a long way and that there are many fewer exceptions to memorize. The first step is to learn the German alphabet, including what sounds vowels with umlauts (ä, ö, ü) and the famous double-S (ß) make.

After becoming familiar with letters individually, it is still important to keep in mind that letters can change their associated sound depending on the company they keep. These changes are part of “coarticulation” and occur when sounds sort of melt together. If letters didn’t adjust to accommodate their neighbors, speaking would be very tedious, as Lieberman & Mattingly (1981) pointed out:

“The obvious consequence would be that each unit would become a syllable, in which case talkers could speak only as fast as they could spell. A function of coarticulation is to evade this limitation.”

So, if you’re ready to progress from sounding out each syllable to speaking fluently, check out these key pronunciation tips and, most importantly, practice regularly! Listen to German radio or podcasts, read out loud to yourself, and sign up for an online course like Lingvist’s German course to use the speech recognition feature and get feedback on your pronunciation.

Both English and German use a classification of “friction-full” sounds called “fricatives” for certain letters.

You may have noticed that Germans speaking English close their lips around the “w” sound to make more of a “v.” When speaking German, channel what you know about a German accent in English to make your German sound more native-like.

Start by making an extended “w” sound, then, while still producing the sound, close your lips into a “v” shape and make a very soft “v.”

The German “v” is an unvoiced fricative when it’s at the start of the word, meaning that you don’t produce sound as forcefully and your lips are creating that friction (still touching). It’s very similar to the English “f” sound.

The exception to this rule is with loanwords from English or Latin like “Vakuum,” which use the English-like pronunciation of “v” at the start of the word.

The German “r” is a uvular fricative, meaning the friction is located in your throat. The “r” pronunciation in German is like the clearing-your-throat noise that people often call the “French r.” It’s like a quick, guttural version of the “-ch” in “Loch Ness Monster.” Just remember that the hard rhotic English “r” sound (like in “park”) is NEVER used in German.

You may find in some dialects of German that the “r” sound is rolled, but if you’re just starting out, it’s not necessary to learn this, as it’s only used by certain speakers of German anyway!

2. Vowels: Get the Long and Short of It

Vowels can either be “long” or “short,” which as you might have guessed, refers to the duration of the sound. In English, adding an “-e” to the end of a word often transitions the middle vowel from short to long.

In German, the vowel is always short before a double consonant. This includes -ss, but not -ß, since it’s just one letter.

The vowel is always long before an “h.” Vowels before -ß are also long.

This letter combination should be easy to remember because it’s part of one of the first sentences that every German learner is first exposed to:

If you see either of these letter combos at the start of a word, imagine that there’s also an “h” (“shp”/ “sht”) between. Lead into the “p” or “t” with a “shhh” sound, like you’re shushing someone.

When this letter combo is found in the middle or end of a word (or syllable), it’s pronounced like the “st” in the beginning of “straight.”

Sidenote: Notice that whenever the “end of a word” is mentioned here, it may be more appropriate to say the “end of a syllable,” because in German words can be combined to form so-called “Mammutwörter” (“mammoth words”). Though they may look intimidating at first, know that you can mainly just break these compound words down into their components and pronounce each as you would the individual words. If you think about it, you don’t exactly pause between each word in English either – you just speak continuously. You’re simply better at locating the word boundaries since you’ve had more exposure to the individual words in English.

You will also likely be familiar with this sound as a beginner, as it’s present in the name of the language itself! The -tsch is pronounced like the -ch at the end of “couch.”

These two letters are not at all pronounced as they are in English. It’s more like “kv” or “k-vuh,” but with just a hint of the “k” sound and more emphasis on the “vuh” portion.

Essentially, you just run these two sounds together very quickly. Start with your lips in the position for creating a “p,” but then switch quickly to an “f.” This will definitely take some practice, as your lips are probably not used to switching between these two as quickly as a German speaker’s lips are – simply because they’ve been practicing their whole lives!

After any other letter, it’s a soft “h” sound. This sound doesn’t really exist in English, but it’s very breathy, almost like a softly hissing cat.

Just like in English (think of “-ou-” in “house”), certain vowel combinations in German take on a new sound of their own.

4. When in Doubt, Pronounce Everything

One sound can make a big difference in the meaning of the word. English speakers have a tendency to rush through or skip over letters in the middle of German words and leave off some letters (especially vowels) at the end of German words. Remember that in German, every letter gets its fair share of the spotlight. Of course, there are some exceptions to this, but it’s better to assume that each letter needs to be pronounced than to combine letters into one quick sound, when there really should be two sounds pronounced.

Particularly when declension gives German similar-sounding case endings that clarify the part a word plays in a sentence, enunciation is especially important to get right. For example, if you aren’t careful to fully pronounce the accusative possessive pronoun “-en,” “-s,” or “-e” ending, it may be unclear whether you’re referring to a masculine, neuter, or feminine/plural noun.

Start by being unafraid to sound silly and speak über slowly, and eventually your pace and the flow of your German will naturally start to speed up.

5. Don’t Be Tempted by False Cognates

It’s a common phenomenon in speaking a foreign language to come across words that resemble words in your native language and assume that they share the same meaning. When this strategy works, these words are called “cognates,” and (as long as you pronounce them correctly) your seemingly advanced vocabulary will impress everyone.

When these words don’t actually match up, they’re called “false friends” and will often catch you off guard. For example, imagine that someone asks you about your “Fahrt” when you’ve just arrived and are meeting them for the first time. Don’t be tempted to give them details about your bodily functions; they just want to know about your “journey.” If they next tell you that you’re welcome to their “Klosett,” don’t help yourselves to a new outfit, because they’re just offering you to use their bathroom (like “water closet”).

Using cognates is a bit of a gamble, but it’s usually worth the risk. However, knowing the cognate is not the only necessary step. Using the word understandably in conversation requires that you forget everything you know about how to pronounce it in English and pretend that it’s a brand-new German word you’re coming across for the first time.

Approach these words with no preconceived pronunciation notions, and you’ll have a chance at incorporating them into your sentence flawlessly. Many German words are spelled the same and mean the same thing (hooray for “true friends!”), but are pronounced differently. So, it’s like getting a word for only 1/3 of the price.

Here are a few examples of words that English native speakers often forget to pronounce in a German style. Try pronouncing them using what you’ve learned so far in this German pronunciation guide about how letters behave before you listen to the audio!

Sign up for Lingvist’s German course today to build pronunciation practice into your daily routine on the go or at home!

Like many other apps, we collect personal data to provide a better experience for our learners. Please review our Privacy Policy to learn more about how we process this data.  END_OF_DOCUMENT_TOKEN_TO_BE_REPLACED