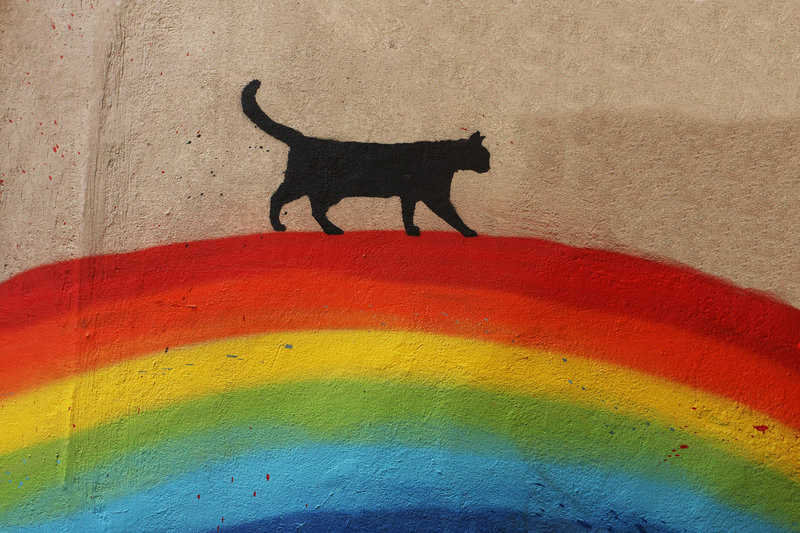 Somewhere Over the Rainbow

Where exactly do dreams come true? We’ll need a few prepositions (and maybe even a prepositional phrase) to find out…

Somewhere over the rainbow Way up high

Someday, I wish upon a star Wake up where the clouds are far behind me Where trouble melts like lemon drops High above the chimney top

Prepositions help describe where one thing is in relation to another, in addition to describing movement, time, or providing a description of something/someone based on their location. Prepositional phrases can consist of multiple words, which, when combined, function as a preposition does.

These small words make a big difference. Consider the difference between these two responses:

A: Está en el tocador It’s in the dresser.

B: Está sobre el tocador. It’s on top of the dresser.

If you’re hunting a large spider in your apartment, I imagine you’d like to know the difference.

The Most Common Spanish Prepositions

The good news is that apart from the contraction of a and de with el (al and del, respectively), prepositions do not change to show gender/number, etc. like many other Spanish words. This means that you can just plug the appropriate preposition into the sentence. Be aware that in Spanish, prepositions cannot come after the noun like they can in English (actually called postpositions), so rather than translating word for word, you’ll need to keep in mind which preposition is appropriate as well as where it belongs.

Are you en the know?

“In” may seem like the obvious translation of “en.” In some cases, you can get away with using “en” in the same way as “in,” while in others the usage diverges from English.

El pastel está en la nevera. The cake is in the fridge.

As for talking about being inside of a building or a location like a park, forest, or beach, the Spanish “en” actually seems more consistent than English… We won’t get into why English uses “at” for some locations, but in Spanish, you can use “en” for all of these examples:

Estamos en el banco. We are at the bank.

¿Te gusta hacer fiestas en la playa? Do you like to party at the beach?

En should also be used when talking about an event, rather than a strictly physical location.

Lloré en la boda. I cried at the wedding.

As in English, “en” is used to talk about when something will happen:

en un minuto – in a minute en otoño – in the autumn

Solo hablamos en español. We only speak in Spanish.

¿En serio? Are you serious?

When talking about subjects or fields of skills, Spanish uses en where English uses both in and at:

Todos son terribles en matemáticas. They are all terrible at math.

Apart from the phrase for “You’re welcome” or more literally “of nothing/it’s nothing,” “de” can correspond to “of,” “to,” “from,” and even “by” in English in the following contexts:

Ella es de Colombia. She is from Colombia.

Sabemos todo del helado. We know everything about ice cream.

encima de on top of

From Here to There

de aquí a Londres from here to London

de una cosa a otra from one thing to another

de sábado a domingo from Saturday to Sunday

What it’s made of

Though these tables of translations are helpful to draw your attention to the differences between prepositions in Spanish, the real trick is being exposed to as much Spanish as possible! After hearing prepositions paired with certain verbs, the appropriate preposition will begin to feel right in certain contexts without any explanation, just as they do in your native language. Try listening to Spanish podcasts or radio stations while on the go or comparing the use of prepositions in English and Spanish versions of short stories side by side. Sign up for Lingvist’s online Spanish course to quiz yourself using fill-in-the blank exercises and more!

Like many other apps, we collect personal data to provide a better experience for our learners. Please review our Privacy Policy to learn more about how we process this data.  END_OF_DOCUMENT_TOKEN_TO_BE_REPLACED